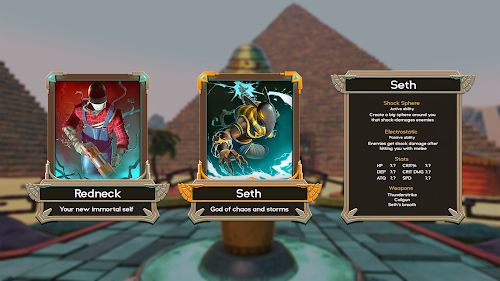 This game is a fast-paced first-person shooter, that will require you to have a pretty durable mouse as you will find that you need a huge amount of fast clicks in order to play this game. I played it for about two days and took me an approximated time of about 7-8 hours total(both days) in order to complete it. It is incredible but after this time I had a muscle soreness for my index finger(mostly) and a little bit for my middle finger of the firing hand. And I said that is incredible as I didn’t have any muscle soreness for any finger in a period that easily surpasses 10 years.

Some popular old games that in my view happen to be similar are Serious Sam, Quick, and maybe Alien Arena. With that said you may imagine that when I wrote fast-paced, I actually meant “godlike” speed of movement. And that for me is a very attractive feature as it allows you to dodge in a very effective manner in any situation, and that’s the most important thing in this kind of shooter.

Story and Progress through the game

Not much from the story point of view, from what I observed during the game it can be expressed in two or three phrases. A nicely “Kansas”(I deduced that from the audio voice) redneck is somehow kidnaped by some kind of outer space aliens which will teleport him to the “Valley of the Kings”. You have to kill hundreds of minions stationed in each of the three pyramids, each pyramid has 7 floors, two of the floors are special, the last one and the third one, in the last one there are no minions just the big “boss”, and in the third one, there are minions and the mini-boss, after passing the mini-boss you will be able if you purchase the mini-boss medallion to restart your way from the level 4 of the pyramid in which you have died. If you are killed you respawn from a sarcophagus that is placed between all three pyramids, in the front of the sarcophagus there is a tree of skills and a market, you can purchase skills, scrolls, and items from these two places using gold that you collect from killed minions. If you enter a pyramid you need to dispose of all your unspent gold.

Most of the skills will improve your stats like attack power, defense, critical hit damage, hit points, and so on, some of the skills will let you play by using the favor of some Egyptian Deity and you will have other weapons and other special abilities most of the deity characters have 3 starting weapons and they only can carry those 3, but weapons can be switched when you find others inside a pyramid, there are also special weapons that you can only find not get from any deity. Also, there are many scrolls that can drastically affect your stats, both in negative or positive ways, and from my experience sometimes 2 or 3 negatives scrolled together can have somewhat of a positive effect. Using the market you can start a pyramid either with a random scroll or a positive one( that will cost more). Scrolls and weapons usually are found in chests but there is also a small chance to get one from a fallen minion.

The game has no difficulty setting but if you don’t get many skills from the tree of skills is not a walk in the park, I completed the game when I had roughly about 50% of the tree completed. When I completed the game I had a huge amount of luck, cause I got two negative scrolls one that took half my ammo and one that only let me use one weapon but with increased damage, and fortunate for me in those conditions I had the card throwing weapon which made the game ridiculously easy, one thrown card took about 20% of the last boss health, so you can imagine how easy it was.

Anway after defeating the last boss the game will finish with a sit-down of you(redneck) and newly come alien enjoying cold beers.

A bit about the quirks and gameplay

From the gameplay perspective, everything was ideal with rare occasions when a minion gets stuck somewhere and you can’t get past the room your in, so you have to start the whole pyramid again. Another aspect that I appreciated was the map inside the pyramids changed randomly upon entering. Although is a little bit difficult to observe very well the minimap due to its relatively small size, what is important about the minimap is to locate room doors. Every pyramid has its own style(graphics, ambient, and music), but some of the minions are essentially the same in each pyramid, also some rooms have the same map so if you play for a while you will quickly learn all the possible rooms.

The third and last pyramid has a futuristic/alien interior style, it is very colorful and flashy which makes it pretty difficult to spot incoming fire and foes, and it can get frustrating if you take damage and need 3 seconds of struggle and narrowing your eyes in order to spot the threat.

Some notes at the end

One pleasant aspect that I forgot, is the awesome voice and accent present in this game. Some phrases that I remember, mostly because of the accent are: “With this scope, you can see the USA” and “Egyptians call it a shiv, red necks we call it a toothpick”, of course, these aren’t the only ones that I remembered even if two weeks have passed, but the is no sense in writing all of them here as I hope you will enjoy this game as much as I did.