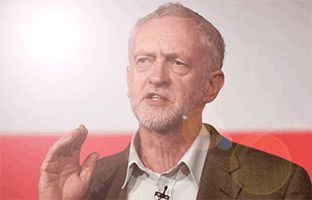 About some days ago I wrote a sarcastic comment on a youtube clip that was biased from my point of view, and I didn’t do that just cause I think it was biased, cause as I previously imply, objectivity is troublesome to achieve, especially when considering the present polarized society.

The main reason that angered me, wasn’t the bias, it was the way that the clip was made, with many scenes taken out of context, and almost no argument to back a smearing narrative.

So I enabled my sarcastic mode and wrote a pretty darn subjective satiric comment, moreover due to its length, I thought why not make an article out of it, here it is:

I am sure that Corbyn wants to annihilate all those super genius rich people that care so much about this world, and I know that from the enormous public outcry, let’s all hope that they don’t extenuate to death from all the whining.

Is it only me that wakes up in the middle of the night sweating and being scared to death upon contemplating the perspective of a future economy where trickle down isn’t sacred anymore? Gee, I wonder why those pesky poor people don’t understand that nothing is for free especially survival if you can’t afford decent health care just die in a corner with dignity and don’t expect help from anybody and particularly not from a rich fellow, after all, if you exist and you suffer is only your fault.

Another thing that also shouldn’t be free is the vote, even though it doesn’t represent much power it is clear that an enterprise government with a CEO is a better approach, I am sure that you all know by now how great are CEOs, I hear a lot that they can work even 80 hours in a single day, and they have such a visionary perspective, all the media is praising them, why to waste time writing that half of million children starve in God knows what corner of the world when we can cover how Zuckerberg achieved all his yearly goals.

So in case you wonder don’t dare to vote Corbyn a man with a destructive mind, that just doesn’t want to give up his message for more than 30 years, what politician would do such an idiotic thing, not change his message to the all wonderful tune of money flow.

Stay strong, stay stable and without mercy for anyone, listen to the mainstream media, and don’t fall for this evil, communist, socialist, out of touch, unelectable, fairy duster, Mutton-headed old Mugwump, that clearly is a hell spawn from the 40s.

I don’t understand why we don’t have some Reaganism or Thatcherism available in syringe doses, I mean yeah having a mostly controlled media works, but as long as there is some opposition left we need something more effective, something more pro-business like making socialist ideas totally illegal, invent some indoctrination camps for the “right” way, it is an outrage but now some universities had the audacity to have speakers that teach students pro-socialist concept like worker co-ops, how could such tragedy had happen, 10 years ago this wasn’t even possible.

How a rational human can’t understand after so much effort that we put, that pro-business is better even than pro-humanity, after all, environment doesn’t matter if you can make a profit and also this incredibly stupid concept of progressive taxes, even universal taxes are wrong, we should impose a pro-business tax where the larger the company the smaller tax will be, that way maybe we will be tempted to pay the tax, and not invent complicated tax evasion schemes.

Governments don’t understand that if they don’t play by our rules we can leave the country, but I will go further and say that if Governments all around the world will not contain even the smallest trend of socialism we will eventually leave the planet. Yeah you heard me well, we will leave and will take all our assets to our new home, it doesn’t matter if it will be the Moon or Mars, we will ship our assets there, including any natural resources, because you know you must work hard in order to be so-called “distributor” of a natural resource but in fact to own that resource that was there for all.

Anyway am sure that the next global economic crises will straight things up, cause in economic crisis times we can enjoy the only wealth redistribution we like, that is we get more you get less, and maybe I hope sincerely that if work 2 full-time jobs being paid in a day what others earn in a second, you will be too frightened to survive and you will accept to do anything without hesitation. Like a beaten up dog, you will wave your tail even if we throw a glance at you. And that picture of the world my friends attains for a truly wonderful existence of humankind.

A note, to any reader: I don’t perceive the world in such hard lines as someone could deduce from the content of the comment, after all, I believe in point-to-point argument without any kind of generalization.